Statement on the situation in Ukraine

Wolper Jewish Hospital joins with the Executive Council of Australian Jewry (ECAJ) in expressing its concern over the current conflict in Ukraine. We endorse the following statement by the ECAJ:

“We watch with anguish and despair as the people of Ukraine face war, loss of life, and the prospect of loss of land, and loss of freedom.

“Ukraine is a sovereign state and its people have the absolute right to determine their future. The military conquest of another state’s territory under the pretext that the invader is protecting inhabitants of the same ethnicity, has a dark and sinister history. It is difficult to comprehend how such acts could be contemplated by the Russian Federation, which has itself known such devastation from foreign invaders.

“We express our deep concern for all the people of Ukraine, including its Jewish community, and hope that all Ukrainians remain resolute in the face of these grave challenges and take comfort in the knowledge that the world is with them.” 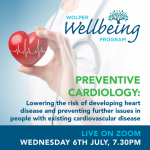